"Remember kids," (kids eating chocolate eggs) "Jesus died for your sins" "I know its great!" "No no its very bad!" "Whatever, just keep giving us these eggs"

So I have a new job. I'm an admin assistant which is suuuper exciting.

I was supposed to start on a Monday but my cat scratched my cornea with her claw and my eye swelled shut. So my new first day was Tuesday now. I was walking to the bus that morning (with the hurt eye shut) and I was in the crosswalk when I was HIT BY A CAR! This idiot just made her right turn straight into me and threw me to the ground. I was so frantic to get to work and disoriented from being hit that I ran to the other side of the street and cried. The girl stopped for a second, but I guess figured that since I was on the other side of the street, that it was okay for her to go. Yeah.

Also, a homeless person blew his nose into a gust of wind and it hit me in the face and my undamaged eye. Delicious.

So ignore that last post as I'm still getting this lj text thing down. Also, i have not abandoned lj, I am just employed now and spend all day on the computer, so it's the last thing I want o do when I get home.

I will update shortly on the ridiculousness that is my life.

Sorry for the camera phone picture. Too lazy to get out the real camera. From top to bottom, the books are: The Villains Guide to Better Living by Neil Zawacki, Cat's Cradle by Kurt Vonnegut (I can't believe I haven't read this), Everything is Illuminated by Jonathan Saffron Foer, American Psycho by Bret Easton Ellis, A Heartbreaking Work of Staggering Genius by Dave Eggers (had to get this because I'm currently reading You Shall Know Our Velocity! and LOVING IT), Naked Pictures of Famous People by Jon Stewart, Nothing's Sacred by Lewis Black, A Supposedly Funny Thing I'll Never Do Again by David Foster Wallace, and on the side is The Copy-editor's Handbook by Amy Einsohn. I also bought these online because I'm an editing nerd:

I'm in Phoenix now with a delayed flight, so thank the airport gods for free wifi! Our first plane was broken - we had to get a new plane because maintenance was unsure of the first plane's safety. I'm so glad they decided that. I hate flying on a plane that has just been messed with by the maintenance crew for an hour.

Anyway, I see Colbert on the 10th! I'm hoping to find someone to trade me an extra Daily Show ticket for my extra Colbert ticket. Two-for-one would be most amazing. But if not, I'll just catch a play. Blythe Danner and Gale what's-his-face from QAF are in "Suddenly, Last Summer" and I'd love to see that.

Oh, and if anyone doesn't have my new cell phone number and needs/wants it, reply and I will send it your way. 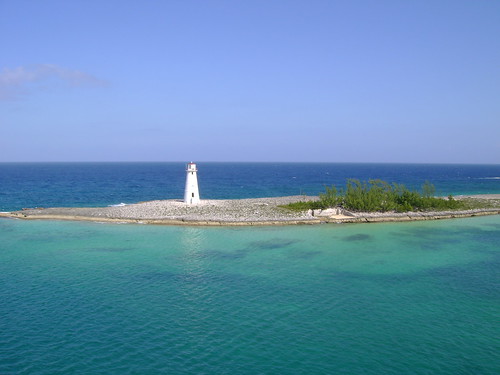 I failed to write in here that I was going on a cruise for Christmas with my family. We went to 5 islands: Puerto Rico, Antigua, St. Thomas, St. Maarten, and the Bahamas (which this is a picture of as we arrived). IT WAS AMAZING. The water was so amazingly blue and clear!

It's tonight! I will soon be watching fantastic bands play fantastic songs with Ruth. I am crazy excited.

Also, got my confirmation email from The Colbert Report for my tickets!

Yes, there was SNOW in Seattle yesterday. Around 9 or 10 o'clock, it was coming down in HUGE snowflake clusters. I love the snow so very much, so I got bundled up in my peacoat and one glove (I could only find one) and went for a walk in it. Threw a snowball at Alex's window on the way home too. Forgot he had fragile windows. Ooops.

Anywho, I have a new favorite tv show. It's called Dexter on Showtime (which I do not get), so here is a link to the first two episodes on Showtime's site that they are streaming FREE. http://www.sho.com/site/dexter/sneakpeek/home.do

It's a show about a serial killer that only kills other murderers. It's a dark topic done very well. Oh, and Michael C. Hall from Six Feet Under plays the title character.

Mr. Hodgman, for those of you who don't know of his greatness, is a professional writer of a complete book of world knowledge (and also on the Daily Show often and in those Apple commercials as the PC). Anyway, I have again made it into his blog (and onto his website since it has a feed of his blog) with a picture Alex took of my chalking shenanigans in NYC. This makes me insanely happy.

His website is http://www.areasofmyexpertise.com/. Do purchase his book. Yes. That way you will understand what the H in sunrays chalkings are for. There's a flickr group where everyone posts their H in sunrays pictures.

Oh, and here's my first appearance in his blog when he signed my book:
( Collapse )

I'm off to NYC again this morning so that I can go to the Daily Show: Ten F#@cking Years concert on Thursday.

I almost decided not to make the trip because I was just there, but I spent like 8 hours trying to get tickets in September, so why not? I'll be back on Friday.
Collapse